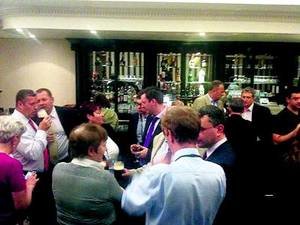 Inside action: the photo Ciaran Cuffe uploaded to his Twitter page

JUNIOR MINISTER Ciaran Cuffe has been forced to withdraw a picture from his Twitter page after he was found to have been breaking one of the golden rules of Leinster House.

While Green party chairman Dan Boyle ensured that Willie O'Dea was the first ever government minister to be 'Tweeted out of office' last February, another Tweet has landed his party colleague Cuffe in hot water.

After the Civil partnership Bill passed all stages in the Dáil on Thursday night, Cuffe Tweeted the news on his Twitter page before going into the Dáil's visitors' bar to join in the celebrations.

Above the headline, "Some day, one day, this day – celebrations in the Dáil visitors' Bar" Cuffe uploaded a picture of people enjoying a celebratory drink.

Even though there are strict rules in Leinster House that photos may only be taken on the plinth at the front of the building, Cuffe took the snap and Tweeted it.

When the Houses of the Oireachtas commission, the body that looks after the day-to-day running of the Oireachtas, found out about that Cuffe had put the picture up on Twitter they immediately requested that he remove it.

An Oireachtas spokeswoman said, "There is a rule in place that does not allow the taking of photographs in the bar area. This is in place to protect the privacy of both members and other users of the bar. When this situation was explained to the member in question he readily agreed to remove the image."

Like his party colleague Boyle, Cuffe regularly Tweets events in Leinster House as they happen. He has over 1,500 followers who are among the first to hear the results of various Dáil votes, live from the chamber.

Cuffe told the Sunday Tribune: "I was in the Dáil bar with some visitors celebrating the passage of the Civil Partnership and Planning Bills through the Dáil and I Tweeted a picture of the Dáil bar. Then this afternoon [Friday] I got a call from the Superintendent in the Oireachtas to say it was against the rules.

"After eight years in the place I am still discovering the rules. I removed the picture from my Twitter stream when I became aware it was against the rules. I think that visitors to the Dáil bar would like some visual memento of the occasion and I don't think that removing that rule would shake the State to its foundations."

A spokeswoman for the Oireachtas said that after the picture was removed, Cuffe would not face any sanction for breaking the bar rules.