Home News | International | Letters | Editorial & Opinion
Fear and coasting in the Financial Regulator's world
Patrick Neary was clearly not up to his job, but the greater part of the blame lies with the system to which he belonged, writes Michael Clifford 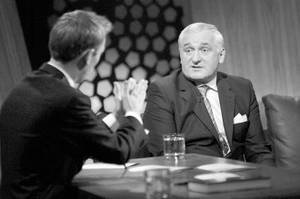 What if Patrick Neary had shown backbone and initiative? Would he have saved us from the worst of our troubles, or would he have been forced out of a job?

The release of documents relating to the bank guarantee has hauled Neary back into the spotlight. Neary was chief executive of the Financial Regulator during the blowing and bursting of the bubble. The earliest leak from the documents on Friday concerned Neary's assurance to the government three days before the guarantee that all was fine in the banks. The story set the tone for what was to follow. This week's award for pantomime villain of the piece goes to Patrick Neary for his role as Sleeping Beauty.

While the public concentrates its ire on Neary, others – government ministers, the Department of Finance, bankers, developers, financial consultants, parasites in the professions – all slink off into a quiet corner.

It's now obvious that Neary wasn't up to the job. However, he was far from the only one, and he was operating within a system that was rotten to its core. There are many with blame on their hands who are happy to see Neary thrown to the mob.

He was a functionary of a ludicrous system. He joined the Central Bank in 1971 after spending a year studying Greek and Latin in UCD. He had no economic background. He rose through the ranks of a public service system which values length of tenure over merit.

There was justifiable anger when the terms of his severance came into the public domain. How could he be paid that after making such a hash of the job? The answer is that public service pay and pensions at the upper level are cast in gold. There is no such thing as a financial penalty for poor performance. The gravy is there to be scooped up, irrespective of how one performs.

The size of his severance package struck many as outrageous, irrespective of his performance. Again, that's the system. The theory propounded by successive governments is that the likes of Neary would be snapped up pronto by the private sector if not properly "compensated". We now know that in both public and private sectors there was little correlation between what some people were paid and their ability to perform the task at hand.

Despite the spin now being propagated, Neary was not an aberration of the system, but merely a functionary. To admit that, though, would be to accept that the system is all wrong.

What if he had spotted what was afoot and hauled the banks over the coals back in 2005? How far would he have got? Around that time, the domestic banks began to borrow from abroad, such was their hunger for more money. That was when alarm bells should have gone into overdrive. There were also warnings from some economists, and the view from the New York Times that Ireland was the "wild west" of European finance. What if Neary had woken up and cracked a whip at that stage?

A hint of what might have occurred lies in events from earlier this year. In February, Neary's successor Matthew Elderfield placed Quinn Insurance in administration. There was an immediate outcry, particularly from local politicians. Despite everything that was known about the catastrophic results of light regulation, politicians were demanding that Elderfield ease up. Pressure was brought to bear on him, although the government kept its distance, well aware that if Elderfield quit, the wild west would become the untamed world. With Elderfield subjected to that mild level of pressure now, when we know what we know, what would it have been like in 2005 if Neary had attempted to rein in the madness?

Would Bertie Ahern have allowed anything that might have prevented the boom getting boomier? Or cast any cloud onto the horizon of the next general election?

In 2005, Paul Appleby's office had just 36 staff, including six gardaí. That was all the resources provided to police white-collar crime. Appleby requested another 20 personnel. It took the government two years to give the okay – at a time when public service numbers in general were going through the roof. And then, Appleby had to make do with an extra eight, rather than the 20 requested.

"It is a question of prioritising staff," Ahern told the Dáil. "He will have to wait his turn."

We now know that Neary's office was similarly understaffed. Earlier this year, Elderfield told an Oireachtas committee that he was surprised at the lack of resources in the regulatory system. He said that having two regulators for the largest banks was "miles off what was needed". He had got approval for an extra 150 staff, but said he would require "a couple of hundred more".

Even if Neary was minded to get stuck into the banks, he didn't have the staff required to enforce proper regulation. Any move to get tough would most likely have resulted in a row flaring between government and the regulator, ending with the latter's decision to pursue other interests.

None of which excuses Neary's dereliction of duty. But he was one of many, and was operating within a system that had created a parallel universe. Making money for banks and developers, and ensuring that everybody was happy going into the next general election was all that mattered. In such an environment, it's doubtful that even the most cautious and vigilant of regulators would have been capable of putting a kibosh on the madness.

Until we have a system that retrospectively punishes politicians and public servants for their errors this country is doomed.
Neary F***ed up and he should pay the price.
Will he? There are two chances of this.
F**k all and none.