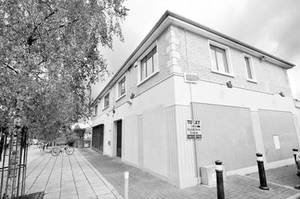 Lying idle: the state-owned building now valued at half its 2002 cost

A BUILDING bought by the state for €1.5m has lain vacant for more than eight years and is believed to have halved in value.

The former AIB bank branch in Blanchardstown, Dublin, was purchased in 2002 as a probation centre but has never been used. According to local TDs, it may now be worth little more than €750,000.

The Office of Public Works (OPW) has received a number of requests from local voluntary and charitable organisations to use the building.

However, it has declined the requests, saying the building will be now converted for use as a driving test centre when "funding becomes available".

The OPW said running costs for the building have been very low, with just €4,750 per year paid for ongoing electricity costs.

The OPW said: "There are no direct insurance costs, as the state carries its own insurance. Planning permission to convert the building for use as a driving test centre has been granted. We would propose to proceed with this development when funding becomes available.

"[We are aware of] a number of voluntary bodies and organisations that have expressed an interest in acquiring the property.

"However, as the building is not deemed to be surplus to state requirements, it is not feasible at this time to make it available to any such body, even on a temporary basis."

Labour TD Joan Burton said of the building: "It is a monument to the insanity of the Celtic Tiger where money was literally thrown away. They just keep saying they are going to use it for something and all the while the value of the property is falling and my guess would be that they would be lucky to get half of their money back for it. It is a testament to the folly of various government departments."