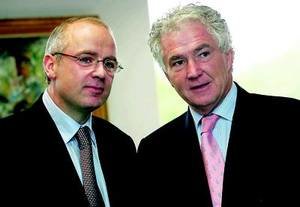 A MAJOR file arising out of the investigation into irregularities at Anglo Irish Bank will be sent to the Director of Public Prosecutions (DPP) this week, the Sunday Tribune can reveal.

It is understood that the file represents a major piece of work including a lengthy summary document of around 200 pages. It is also understood that a further batch of some 39 documents are being completed to be presented to the DPP in the coming weeks. The investigation remains ongoing.

Gardaí are said to be confident that "the DPP will direct that charges are brought against some individuals" at the beleaguered bank. The main targets of the investigation are the former chairman Sean FitzPatrick and chief executive David Drumm. One source added: "The fraud squad detectives have had continuous meetings with the DPP's office about the progression of the investigation. The commissioner is being kept totally up to speed and readily briefed."

It was well-known there was huge frustration in government circles at the length of time it has taken to advance the investigation although there was an acc­eptance that investigators were swamp­ed with information and that "every 'i' had to be dotted and 't' crossed to ensure that nobody gets off on a technicality".

It is understood that Taoiseach Brian Cowen, justice minister Dermot Ahern and enterprise minister Batt O'Keefe have been regularly briefed on the investigation's progress.

Ahern will also bring a bill to cabinet this week which arises out of recommendations from the Garda commissioner on tightening up the laws on white-collar crime. It is understood the recommendations include allowing gardaí to break up detention periods for those arrested to help with inquiries. The idea is that instead of a person being held for 24 consecutive hours, it could be spread over a number of shorter detention periods which allow him or her to be questioned about new information that has emerged.

There is also likely to be increased powers to compel witnesses to give statements. The plan is to fast-track the legislation to allow it become law before the current Dáil dissolves which means it could be used in the ongoing investigation into Anglo Irish Bank.

Gardaí and the Director of Corporate Enforcement have been investigating events leading up to the nationalisation of Anglo in 2009, including whether loans were used to prop up the bank's shares.

The investigation ranks as one of the most complex of its kind in the history of the state as gardaí have examined over 115,000 emails and statements have been taken from 350 people.

they were slow enough dealing with the theiving bs but very quick to deal with the likes of joe macks alleged road traffic offences outside the dail.joe for the park

Am just wondering how expert those fraud officers are in the financial field. How are their reports supported, have they employed forensic auditors, or are we looking at the case collapsed due to insufficient evidence malarkey, and if the reverse were true, & Drum was here, the Americans would be breathing down our necks for extradition, so heavy we would be shaking in our shoes, at least Cowen & his disciples would.

Can we expect search warrants to be out of date, community service orders and an auld fine or two.....smoke and mirrors.....

I bet it will all come to nothing, nobody will go to jail, nothing will change, same old, same old.

Gardai?? "Keystone cops" and political patsies the lot of them. The sooner we dump our archaic, useless and politically tainted justice and police system for one based on politically independent investigating magistrates, as on the continent, the sooner ordinary people might see some semblance of justice out there.
The guards are not only "intellectually challenged", they are politically and morally suspect. Too many of them are involved in the whole building and banking scandals as primary agents, to be considered impartial or appropriate investigators.
We need to over-haul our legal and political systems, but who would lead the charge? Certainly not any of our current crop of political prostitutes, with the exception of the odd decent sod like David Norris.
"Let him who is without sin ( i.e. links to builders and existing or past politicians or gardai )be the first to cast a stone ( as in get elected on a promise to reform every aspect of our corrupt systems.

Our jails burst at the seams with petty but relatively harmless criminals while these mega thugs, and their pals, laugh at us. We should have had these super thieves in custody a long time ago awaiting fraud charges, and Bertie, Biffo and pals in with them.

Clearly this is far less serious than a mere mugging or a road tax infringement! Muggers don't usually have friends in high places, well not since GUBU days at least. And wasn't that a FF attorney general too?

Jack
We have probably the best police force in the world. Inability to secure prosecutions is often down to lazy loop holes in archaic laws.
You don't like the cops here?....try livin in almost any African or South American country.

Best police in the world?? What a joke. Our police are a bye-word for incompetence, particularly in the courts, inadequately trained, hopelessly unfit for purpose, and riddled with political influence and corruption.
They may be tourist-friendly and a good laugh down in the pub, but their total inadequacy to address financial criminals and tackle political corruption is beyond question. We need a european system with qualified, independent investigating magistrates and a pro-active, professional prosecution service.

I think the Gardai are probably the only public servants that function close to expectations.