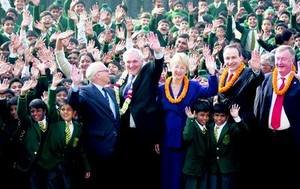 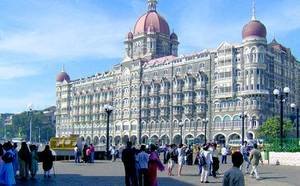 Cowboys in India: The Taj Mahal Palace Hotel where Bertie Ahern attended a €28k banquet paid for by the Irish taxpayer; 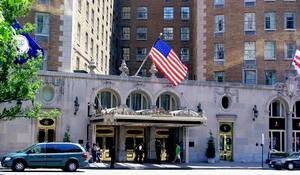 Bertie Ahern has stayed at the Mayflower hotel in Washington 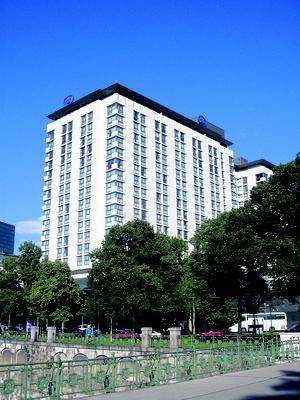 Bertie Ahern has stayed at the Hilton in Vienna 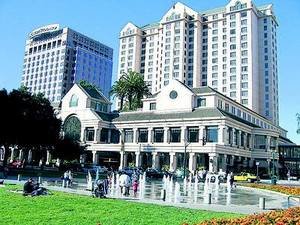 Bertie Ahern has stayed at the Fairmont Hotel in San Jose

A SINGLE night's accommodation for the former taoiseach Bertie Ahern at an exclusive London hotel ended up costing almost €2,400, while another one-night stay in Brussels cost the taxpayer €3,000.

Documents outlining the Fianna Fáil politician's travels abroad in 2006 with a coterie of advisers and other politicians detail hundreds of thousands of euros in expenditure.

Ahern stayed at some of the world's most luxurious hotels, running up vast bills for official entertainment and charging €40 pay-per-view movies to his room.

On one controversial trade mission to India, the Department of the Taoiseach dined at a banquet at the Taj Mahal Palace Hotel, which ended up costing the taxpayer €28,704.

Included in the entourage on that trip was then arts minister John O'Donoghue, then education minister Mary Hanafin, TD Donie Cassidy and around two dozen other people.

On a one-night trip to London, Ahern and two civil servants managed to spend €5,382 on a combination of luxury hotels and chauffeur-driven travel.

Rooms for the two civil servants who accompanied him cost £334.88 each with a further £51 spent on breakfast the following morning.

The three men, who flew to London by government jet, were collected by a chauffeur, which had been arranged through the embassy with Terry Gallagher's Cartel Limousines.

Two cars were dispatched to RAF Northolt on 23 February to bring the delegation to London and two cars travelled back to the military base the following day. The total cost of the chauffeur-driven convoy came to £1,533, the equivalent of €2,256.

A month earlier, Ahern had travelled to India on a trade mission with a number of other ministers and a dozen government advisers and civil servants.

Other significant costs were paid for by other departments for flights and accommodation for various government ministers, including the now notorious €80 to "Indians for moving the luggage" paid by John O'Donoghue's private secretary.

Some of the bills involved in the trip were extraordinary, including €28,704 in "banquet charges" at the Taj Mahal Palace and Tower Hotel.

That included a pool-side buffet dinner, a floral decoration, as well as hundreds of pints of Guinness, Fosters, Kingfisher beer as well as spirits.

Rental of a room known as the Secretariat, which provided computer facilities and printing, ended up costing €7,698, details of the bills have shown.

A letter sent from the credit manager said: "It was indeed a pleasure to have HE Mr Bertie Ahern TD, Prime Minister of Ireland and the Irish delegation with us at the Windsor Sheraton & Towers.

"I do hope they enjoyed the stay as much as we enjoyed having them here with us. I am enclosing the hotel bills as per the details mentioned below."

Flights for the former taoiseach and his delegation cost more than €40,000, according to the documents, with one of the flights coming in at €5,560.

Official dining cost dearly for the taxpayer with €522 spent on a meal at the Raj Pavilion and dinner the following night costing €381. It is not possible to extract clear details of exactly how much flight and hotel arrangements for Ahern cost, as charges at one hotel are actually half that of certain civil servants and state that they are simply "a contribution" towards the final bill.

One obvious cost on the trip, however, was the near €1,200 paid in limousine charges for a transfer for the former taoiseach from the Spelthorne Suite at Heathrow Airport to the government jet.

On 8 March, Bertie Ahern headed back to London for a flying visit with the British prime minister Tony Blair.

The only cost associated with the trip was €1,147 paid out in limousine hire to collect the Taoiseach from RAF Northolt and bring him to Downing Street.

Little over a week later, Ahern headed off to the US for the annual St Patrick's Day visit, according to the documents, which cover only the year 2006.

Costs totalled €29,177 with a further €150,000 spent on use of the Gulfstream IV, the government jet, which transported most of the delegation.

Limousine hire while in America came to €6,493 for just three days while hotel costs at the Fairmont Hotel in San Jose totalled €5,842.

Ahern's room costs were relatively inexpensive and a room in the luxury hotel for two nights cost just €422 while accommodation for civil servants was €254.

While staying there on 13 March, the Taoiseach charged three beers and a bottle of water to his tab and paid out $35 for an in-room movie.

Business expenses were also considerable, with $3,398 spent on the rental of computers, printers, fax machines and photocopiers.

Ahern's accommodation bill had risen considerably by the time the delegation arrived at Washington DC where they stayed at the Mayflower Hotel.

The former taoiseach's room is listed on bills as having cost $2,500 each night with $91 spent on long distance phone calls and $40.85 for one movie.

Other civil servants also charged in-room entertainment to the taxpayer with adviser Gerry Hickey charging $48 worth of movies in his $319-a-night lodgings.

Costs for the trip, excluding the use of the government jet, came in at €14,677, with the vast majority spent on limousine hire and accommodation at the Conrad Hotel. Limousine hire for the two-day trip, which coincided with a EU Council meeting, came to €1,556 while Ahern's hotel room cost €3,000.

According to documents from the Department of the Taoiseach, the trip lasted from 23 to 24 March but it appears as if two nights of accommodation were paid for, each costing €1,500.

Last week, the former taoiseach defended his colleague John O'Donoghue and said the Ceann Comhairle had not even enjoyed travelling overseas and would have preferred to stay at home in Kerry.

On 11 May, Ahern and a delegation travelled to Vienna for a trade summit. The group stayed at the Hilton Hotel in the Austrian capital and ran up a bill of €4,586.15.

It is unclear who exactly paid for Bertie Ahern's accommodation and no room costs are listed under his name. A charge of €14.90 for in-house entertainment is all that is listed under the heading "Taoiseach".

At the end of the month, Ahern travelled with a delegation to New York for an address to the United Nations, where costs once more were considerable at €17,020, excluding the use of the government jet.

The bill for two nights at the Fitzpatrick Hotel in Manhattan came to €8,079, according to the documents with Bertie Ahern's share coming in at €1,592.

According to a copy of the Ahern's bill, his room cost $1,000 a night and he also had additional charges at Fitzer's restaurant and for long-distance phone calls.

Limousine hire for the three-day visit cost €3,540 where half a dozen cars transported the group around New York at a cost of $55 per hour.

At the beginning of September, the Ahern travelled to Helsinki for a one-night visit and a summit with costs coming in at just €2,144.

It had been his second fleeting visit to the Finnish capital in the space of two months and the majority of the expense related to hotel bills at the Crowne Plaza hotel.

The former taoiseach's accommodation costs are absent and the room rate listed for the civil servants and advisers who accompanied him are given as €282 per night.

Once again, it appears as if Ahern did indeed stay at the hotel and movie charges of €15 were charged to his room. According to a note at the end, the Taoiseach's "suite" was paid for by the presidency.

Ahern's press secretary Mandy Johnston also charged a movie to her room on the Helsinki trip, according to the documents.

In October, Ahern travelled to Berlin for a meeting with the chancellor but practically no costs are available for that journey with the only cost of any significance a €174 bill for chauffeur services.

All-party talks on Northern Ireland in October also proved inexpensive with €2,104 spent on flights as well as travel and subsistence.

Ahern's official travel continued in that vein for the rest of the year with short one-day trips to London (twice), Finland (once), and Brussels (three times).

Costs involved in the trips were small with the only notable expense being €859 on a chauffeur-driven car for the Taoiseach and €114 for a parking space in Belgium during November.

Later that month, he headed off to London where chauffeur costs through Terry Gallagher Car Hire were listed as €1,559, which paid for transport to and from the government jet.

In December, there was another trip to Brussels and another to London, attracting car hire bills of around €2,000 between them.

On 14 December, Ahern made his last overseas trip of the year when he headed off to Brussels for an EU Council meeting. Car hire for that trip cost €2,097 but accommodation costs have not been made available.

The documents released by the Department of the Taoiseach also show that Bertie Ahern handed over more than €4,000 worth of gifts during 2006, primarily on the state trips to India and ­America.

Is this the man with the common touch you're writing about?

And Ahern wants to be President. No, can we elect him to work in the sewers maybe, because that is where he belongs...with all the dirty rats like himself.

{ hundreds of pints of Guinness, Fosters, Kingfisher beer as well as spirits. }
Not only were they wasting government money, but they were drunk half the time as well.

They should all be robbed of their pensions. And they should be made pay for this farce out of their own pocket.

We are far too innocent and naive for these rogues !!!!

I do not understand what all the fuss is
about !

Its the costs of trying to do business !

Nobody is writing about the likely business generated by all the ministers
travels. Its not even discussed.

The figures here are staggering. 28 grand banqueting in India where kids are fighting over scraps - absolutely sickening.

It shows complete contempt for Irish citizens to squander their money on such vulgar and extravagant piggery. Shame on all Fianna Failures and their Green/Yellow/PD accessories. Their short sighted greed has damaged our society as much as our economy and environment. They've betrayed us, our future and our history. Shame, eternal shame on them and their enablers.

Yeah, we'll comment on message boards about it but this man and his ilk can still travel around this country and be feted by the "ordinary people". Why the stage wasn't rushed during the Late Late shows what a shower of muppets we are. 400 people show up for his book signing. We'll complain away but we won't do a damn thing about it. No wonder the English were able to control us for 800 years.

Have to agree completely with Brian #6. I hope that if this clown is arrogant enough to run for president, the electorate will remember this and his claims that there was a steady pair of hands at the wheel when he was taoiseach. Bertie of course had nothing to do with the collapse of the economy.

The amount of illwill shown to Bertie is shocking in the extreme. I for one have always voted for the greatest Taoiseach the freestate will ever see. His reputation got muddied based on an allegation which was never proven (hence false); and moreover, the Mahon Tribunal never could pin one disreputable deed on him. Hail the great statesman and let's hope he runs for president to lead us out of the rut we find ourselves in.