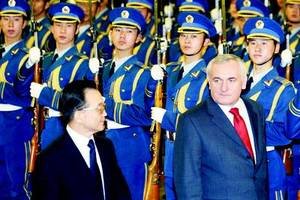 Bertie Ahern on a visit to Beijing in 2005

FORMER taoiseach Bertie Ahern enjoyed an all-expenses-paid trip to China as part of his work as chairman of a forestry investment fund.

Ahern, who has been at the centre of controversy over a possible bid by the International Forestry Fund for Coillte, the state forestry body which owns 7% of all the land in Ireland, met with the president of the Chinese Investment Corporation.

That corporation was set up by the Chinese government and has more than €250bn to spend on dozens of major international investments.

Last year, it announced a change in strategy, moving away from investment in financial assets and switching to resources and property acquisition.

Newspapers in China reported that the corporation would focus on buying up "natural resources" overseas at low prices and selling them on when their values rebounded.

The former taoiseach made the business trip to Beijing three months ago but has declined to provide the dates on which he travelled.

According to an official log of Dáil attendance, the former taoiseach was present for all sittings of parliament in September. He fobbed in for three non-sitting days that month – 20, 22 and 23 September – his attendance record shows. Ahern also attended the two official sitting days of the Dáil that month, on 29 and 30 September.

In China, the former taoiseach met with the Chinese Investment Corporation and visited various provinces to meet governors and forestry officials.

Ahern denied through a spokesman a fortnight ago that the International Forestry Fund had any interest in acquiring Coillte.

"As [Ahern] understands it, the International Forestry Fund has no intention of putting in a bid for Coillte," the spokesman said.

However, the statement flatly contradicts an interview given by the fund's director, Paul Brosnan, to the Sunday Tribune earlier this year.

"The International Forestry Fund is a fund that acquires properties on an international basis [and] if there are good quality assets, they will be looked at. If that includes some of Coillte's assets, then great; but if that includes assets of the queen or king of the United Kingdom, that is fine as well."

Ahern was appointed chairman of the International Forestry Fund late last year, a few months after the report of An Bord Snip Nua recommended the possible sale of Coillte. It emerged then that the fund was registered in the British Virgin Islands and backed by a company that specialises in providing offshore banking.

The privatisation of Coillte moved a step closer when it was included as one of the bodies for examination as part of the review group of state assets. Attempts by Sinn Féin TD Martin Ferris to raise the possible sale of the forestry body in the Dáil have been deflected by the government.

A response by the Department of Agriculture said: "A review group on state assets and liabilities under the chairmanship of Colm McCarthy was established by the minister for finance earlier this year to examine and provide advice on the proper stewardship of state assets and on opportunities for the better use of those assets. The outcome of that review is awaited."