Home News | International | Letters | Editorial & Opinion
Fianna Fáil battling disarray with no communications director and grassroots dissent
The party says it is fighting fit across the country, but there is doubt it is getting its message across, write Conor McMorrow and Shane Coleman 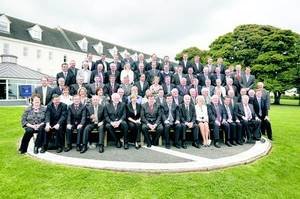 FIANNA FÁIL has had no director of communications for five months now and a number of TDs are angry that the party's collapse has not been helped by the key position being left vacant.

One of the most common criticisms made of the party, internally and externally, is that it fails to communicate its message adequately. So the vacant communications' position has become a source of growing discontent in recent weeks.

One prominent TD, who did not wish to be named, said, "It is quite unbelievable that there are 450,000 people unemployed in the state yet we have not filled the post of director of communications since Gene McKenna retired a number of months ago [in early February]. We are getting hammered in the opinion polls and the party is in crisis yet nobody has been appointed in the important role of communicating our message."

A university student studying public relations recently asked another Fianna Fáil TD for help with his final year thesis. The TD recounted that he was asked by the student if he could arrange an interview with the person in charge of Fianna Fáil's communications strategy to assist them with their research. The TD said, "It was embarrassing as nobody has been in charge of our communications since February."

The word around Leinster House is that the party has offered the job to two people, who have both turned it down. A number of other candidates who did interviews for the role received rejection letters some months ago. It is expected the role will be filled before the summer recess is over.

The party's general secretary Sean Dorgan made a presentation to the parliamentary party meeting last Tuesday evening. In the presentation he gave details of focus groups and other research carried out showing that all party members had to improve communications with their constituents.

As well as the problems with the party communicating its message, Fianna Fáil is also in serious financial trouble. The conventional wisdom suggests that all political parties are not immune to the recession and their fundraising efforts have been greatly weakened. Fianna Fáil are said to have been hit extremely hard in recent times whereas Fine Gael are said to "have buckets of money."

It was widely reported in March that Fianna Fáil is €3.6m in debt. The main cause of the debt has been the number of elections and referendum campaigns the party has had to fund in recent years.

Since the 2007 general election, the party has had to fight two referendums on the Lisbon Treaty, the 2009 local and Euro elections, and the Dublin South and Central by-elections. The second Lisbon campaign alone cost €450,000.

Green Party TD Paul Gogarty reiterated his party's commitment to restrict corporate donations to political parties this weekend. The restrictions are part of the Programme for Government and Gogarty told the Sunday Tribune that the junior coalition partner is hell bent on pushing legislation to that effect through the Dáil in the autumn. This legislation could pose further financial problems for Fianna Fáil before the end of the year although the party would argue that the profile of its donors has changed as 75% of all donations to Fianna Fáil are €100 or less.

Party figures claim that despite the difficult economic and political climates, the party's national collection was up 10% this year and the belief is that the debt will be well under €3m by the end of this year.

The saying that "You can never write off Fianna Fáil in any election" has been a mantra in Irish politics since Eamon de Valera's era. But does it still hold water?

A large part of the reason that nobody could ever write the party off was based on the fact that the party's grassroots structure was so strong. Bertie Ahern famously said that the failed US bank Lehman's had "testicles everywhere". He meant tentacles. And like Lehman's, Fianna Fáil's tentacles used to be everywhere in the country. That may not be still the case.

The party still has a core support that hovers around the mid-to-low 20% mark but the organisation's grassroots are far from healthy.

Chris Flood and Gerry Collins have conducted an analysis of the party's problems in cities and the belief is that the problems are the same nationally.

Senior party sources say that these problems include inactive units of the organisation, not having a presence on the ground and a membership that is predominantly males in their 50s.

"There is a huge level of inactivity but it is not just the fault of the local organisation. Ministers have not been on the ground enough to explain what is going on," said one senior source.

At Easter, Taoiseach Brian Cowen told his ministers he wanted them out and about explaining what the government is trying to do. Cowen has also been out and about more.

"The Fianna Fáil organisation is not what it was but it is better now than it was 10 to 12 weeks ago. We have held constituency meetings across the country and 3,500 people have attended these," said the senior source.

A Fianna Fáil activist came up to one senior minister after a recent meeting and said, "Jaysus, why didn't you tell me before. Now I know what you are at."

Other Fianna Fáil sources dismiss suggestions the party organisation is in disarray. They point to the series of regional meetings in recent weeks – mini ard fheiseanna across seven constituencies – as evidence that the grass roots are still up for it. Five hundred turned up in Galway, 400 in Dublin – where the party is expected to be hammered in the next election – with another 400 in Athlone. "Fianna Fáil people are up for the fight," one source said this weekend.

They also say a lot of work is going on "beneath the radar" – with ministers being assigned to constituency organisations and county councils, along with former TDs Chris Flood and Gerry Collins' reviews of the organisation – that will bear fruit come the next general election.