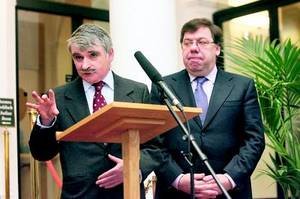 THE Green Party yesterday accused former defence minister Willie O'Dea of misleading the courts as the row between the former minister and the junior coalition partner intensified.

Stung by remarks made by O'Dea on the Late Late Show on Friday, a Green Party spokesman accused the Limerick East TD of "selective recall" of the events surrounding his resignation from government in February.

He said O'Dea had "misled the courts" after first accusing an elected representative of a crime he did not commit.

In his outburst on the Late Late Show, O'Dea claimed that the "corrosive" Greens "behaved very, very shabbily" during the week of his resignation.

And in a move that may drive a wedge between Fianna Fáil and the Greens, O'Dea claimed that Senator Dan Boyle's tweeting and blogging about cabinet business "is very corrosive of the government and... you cannot run a government properly on that basis."

O'Dea said he was amazed to read an interview recently "where Mr Boyle suggested that the party leadership often asked him to tweet."

He added, "If that is the case, then it is very ominous indeed... if this was to continue, I mean the work of government would be well nigh impossible. I mean you run a government on the basis of trust and the basis of collective cabinet responsibility."

O'Dea also claimed that the Greens are agreeing unpopular measures at the cabinet table and then trying to create the illusion that "they are on the side of angels and it is all those Fianna Fáil gangsters that are forcing their hand. I don't think that is a proper way to run a government."

Defending his tweeting yesterday, Boyle said, "We have different ways of communicating and we are a party that believes in being open and transparent. I am not going to change the way I act as a public representative."

A Green party spokesman also hit back at O'Dea. "We will not fuel O'Dea's publicity comeback bid despite his partial and selective recall. We know how disappointed he has been but he had to leave government because he falsely accused an elected representative of a grievous crime and then misled the courts," he said.

O'Dea resigned on 18 February, over controversy surrounding a defamation case taken by Sinn Féin councillor Nessan Quinlivan. It had become clear before he resigned that the Green Party would no longer support the government if he was to stay in office.

Boyle stood over the Greens' position yesterday and said, "As far as we are concerned, the circumstances at the time meant that there was justification for us to call for his resignation. I think that we acted in the only way we could in the interests of our continuance in government and in the interests of the ethics of governance."

While Fianna Fáil yesterday moved to play down O'Dea's comments, a senior Fine Gael source said, "Willie knew what he was at. He was distancing himself from the government as he can sense that a general election is on the cards. He must have good contacts in RTÉ if he was allowed to launch his election campaign on the Late Late Show like that."

O'Dea announced in the interview with Ryan Tubridy that he would be contesting the next general election.

RTÉ should be ashamed of themselves. Willie was given a free platform and was not probed regarding the incredible abuse of power and the nasty allegations he made. Why has he not been called up before the court to explain himself. There is one law for the Irish and one law for Willie and co.

Can you please desist from reporting on the greens,their tweeting,utter incompetence and arrogance,I find myself feeling physically sick anytime I see an article on them...they will be gone soon enough,they are as utterly irrelevant now as they will be in 6 months when consigned to a brief but nasty footnote in the history of this once great State.

Shame on O'Dea for the accusations he made and shame on the people of Limerick if they re elect this man. He is without conscience.

Willie O'Dea should stop being hypocritical. The Greens 'tweeting and blogging' about cabinet business is no more 'corrosive of the government' than his own party's TDs going on the media to disavow policies which the voted for in the Dail.

The fact remains that O'Dea accused an innocent man of running a brothel. Shame on him, shame on the people of Limerick if he is re elected and shame on RTE for giving him a prime time slot.

He should be banned from public office for what he did.

Ah yes Willie O'Dea....we had to wait for him to be sacked from his ministerial position before he actually decided to do some good for the people....and now he has done something useful...expose the Greens as a bunch of hypocrites....but we already knew this already....therefore what Willie did was of reduced value....effectively O'Dea was only telling us what we already knew.

The response from the Boyle was predicatable. The Greens and Boyle have still not been transparent as to why they put their rejected councillors into state jobs...as highlighted in an earlier edition of the Sunday Tribune. There is no way that you can spin that sort of behaviour....even Boyle is incapable of talking his way out of that...

Willie! Running in the next election is a very bad "I(DEA)". Because you're not fit for purpose.

In Relation to the article Greens Blasts O 'Dea regards Late Late Show attack - Mr Boyle show be more worried about the Blasting the Greens will receive from the electorate after all the taxes and hardship they have imposed on the Irish People and their intention also to bring in Water Rates and whatever other taxes they can think of to hardpress us even further
Get off the Stage Boyle - make sure your leader and the rest of the Greens are on that Stage plus your FF buddies the Irish Electorate are no longer Green - we have long meomories !!

Willie O'Dea what can you say? I hope the good people of Limerick consign him to the dustbin of history. He reflects and represents all that is bad with Fianna Fail in his inability to recall accurately, to take responsibility for his actions, to respect the position of an elected represented granted to him by citizens of this country....the negative list could go on...it's is potentially endless. Let O'Dea launch his election campaign, hopefully it will happen sooner rather than later and the people of this country will get the opportunity to get rid of this particularly corrupt party from government!

This was a disgraceful late late show-bit like the one where Brian Lenihan launched his presidential bid. Reasons for his sacking were not gone into at all, and it was obvious he had a clique of his own in the audience to applaud him. Shame on RTE

Comments are moderated by our editors, so there may be a delay between submission and publication of your comment. Offensive or abusive comments will not be published. Please note that your IP address (85.182.80.113) will be logged to prevent abuse of this feature. In submitting a comment to the site, you agree to be bound by our Terms and Conditions