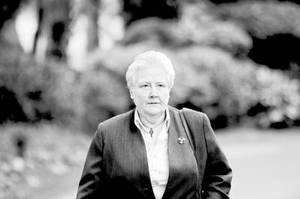 No hope: Marie Collins says the Church's actions have left her thinking 'this is not the church for me'

Well-known clerical abuse survivor Marie Collins, who has doggedly remained a Catholic in the hope that the church will reform, is considering quitting the church following Pope Benedict's decision not to accept the resignations of two Dublin auxiliary archbishops.

Describing last week's revelation as the "final nail in the coffin" of her hope that the church would change, Collins said she has "really gone beyond the point I was at before".

"When I was clinging on to my Catholic faith with my fingertips in the past, I still had hope. And Diarmuid Martin was a symbol of that. I would definitely see this as the end of any hope that things are going to change," she said. "So I'm at the point definitely of thinking this is not the church for me. I'm not just saying that for effect. I just can't see any glimmer of hope, any reason to stay. I'm totally shattered at this point.

"I have always said my Christianity is not in doubt. I am not disillusioned with my faith in God or Christ. But I am just at the point where I'm considering that I don't need to call myself a Catholic anymore, in a church where clerical power holds sway. My hope of reform coming from within the clerical church is gone."

In an interview with the Sunday Tribune, Collins – who was abused as a child by a priest identified in the Murphy report – said the Pope's decision not to accept the resignations of Bishops Raymond Field and Eamonn Walsh meant the "ground has been taken out" from under Dublin Archbishop Martin.

Dr Martin, who is in Italy on annual leave, has refused to comment on the Pope's decision, which he communicated in a letter to priests in his diocese last week.

"I think the worst aspect of the whole thing is that Diarmuid Martin's authority has been undermined," Collins said. "I think he acted correctly in encouraging the resignations of the two auxiliaries not for what they did, but what they did not do."

Along with her fellow abuse survivor Andrew Madden, Collins is due be presented with an "outstanding merit" award at the prestigious Humbert Summer School in Castlebar, Co Mayo, this week.

"We had the letter from the Pope in March, and we were disappointed with that. It had a lot of fine words, but the actions are not living up to those words. And yet you still hang on there, hoping it's going to change. And we had the bishops offer their resignations," she said.

"It would appear that these two others were not sincere, and still believe they did nothing wrong. But if those two had stood up, children would have been stopped from being abused. The fact that the Pope doesn't see that is the final straw for me."

There has been some speculation that the decision to assign both auxiliary bishops "revised responsibilities" was taken by Martin, and was not specifically requested by the Vatican. However, neither the Papal nuncio Archbishop Giuseppe Leanza nor Martin would comment when contacted.

Mary, you should run as fast as you can away from the Church of Rome. everything it practices is the exact opposite to what Jesus preached. They are nothing less than an abomination on the whole of Christendom from the top to the bottom - their record, from the crusades, the inquisition and the child abuse scandals of the recent past bear testimony to that. I spent time in Daingean and witnessed it and suffered it, but it sure opened my eyes to what these so called men of God were capable of - some of them didn't take part, but neither did they protest, when their protests were badly needed.
It really is now high time that they were removed from all positions of authority including the saying of mass. The churches should be taken from them by the laity and they should install their own pastors to lead them in their worship - women of course to play a role in this and better that it should be voluntary rather than paying Rome to brainwash us with their version of Christianity at which they have failed us all so abjectly.
Perhaps old Henry the 8th had the right message for them when he chucked them out nearly 500 yrs ago !

Finally given up on the Church,the behaviour of the Pope is frankly disgusting,how he considers himself a man of God is simply beyond me.
There is a saying "the closer to the church the further from God"
Diarmuid Martin,the fine man he is,has along with the all those survivors of this disgusting abuse have been treated exceptionally shabbily.Shame on this Pope.

Surely Marie Collins realises now that there is no hope of reform. Bishop Martin has been undermined. He must be very disillusioned. Rome doesnt take the child abuse seriously. They are only interested in power.

A lifelong committed and active Catholic, I found myself some years ago in defensive argument with my non-practising son, attempting to refute his contention that the Catholic church was led by a bunch of misogynist old men with little interest in or appetite for truth or justice. Events over the recent past make me now wonder which of us had the stronger case back then.

It was less the abuse by paedophile priests than the protracted episcopal cover up that has shaken me and so many others. Sinful acts, even crimes, are nothing new. The Murphy findings were so clear and so horrific that it seemed imposible to reconcile concealing such outrages with Christian belief let alone with Christian leadership. Yet the evidence was overwhelming that for decades those tasked with leadership of the church had in fact protected the paedophiles and hushed up their crimes.

It appears to me inconceivable that any churchman guilty of such dereliction pf duty could possibly be allowed to remain in leadership. Yet not only did some of the bishops named as guilty pussy foot about resigning (one bluntly refused, bleating he had done no wrong!) but now the very Pope himself refuses to accept the belated and seemingly half-hearted resignations of two of these men.

This "shepherd of the flock" instead of cleansing the church of useless, compromised bishops has chosen to consolidate them in power. I suppose I am not too surprised at this decision by a Pope who equates promoting female priesthood with child abuse.

The one shining light in all this dark business has been Archbishop Diarmuid Martin. He is the only bishop to show honesty and sympathy. If the Vatican has now slapped him down, as it appears, where have Irish Catholics left to go? Who now will cleanse the stinking Augean stables of the Catholic church?

Maybe its time for the Irish church to go back to it's roots pre " Bull of Laudabiliter" [12 century], Pope Hadrian, which gave the Irish church over to the control of Henry the 2nd. It was as nasty a bit of politics as there ever was.

The Devil has a lot of Priests and Politicians on his employment books. That's why they should never be trusted.